Tyler has helped me with baking projects lots of times over the years, but today she made her first cake all by herself.  Auntie Kim had prepared the frosting in advance, but the cake and assembly was all Tyler.  The recipe was the America's Test Kitchen (ATK) German Chocolate Cake.  In typical ATK fashion, this recipe has lots of ingredients and steps in the directions.  As you can see from the videos and photos, the cake turned out perfectly and Phil was honored to be the recipient of Ty's first baking masterpiece! 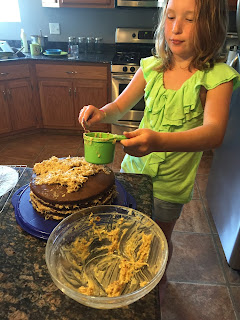 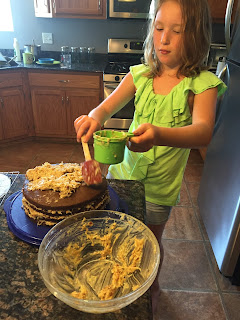 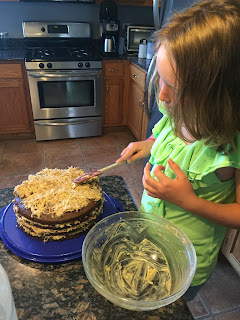 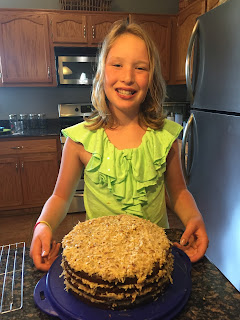 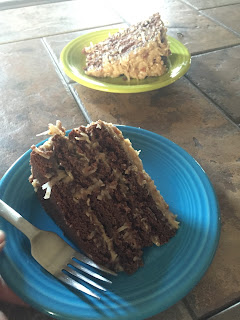 We were enjoying a nice morning out on the patio when Ty excused herself and went into the house.  She came out about 15 minutes later, breakfast in hand.  She whipped up the most delicious breakfast sandwich, complete with perfectly cooked eggs and fried (reduced fat) salami, on a nicely toasted kaiser roll, served with a side of sautéed fresh pear.  Incredibly good.

And to top it off, after we finished eating, she cleared the plates, took them in the house, and completely cleaned the kitchen - even the stove.  She's always had a serious interest in cooking, but has now taken it to the next level; creating and executing, and cleaning up after herself, completely on her own.  I'm one proud mom!

Posted by Jill Kullen at 8:02 AM No comments:


We went to the grocery this morning and Ty insisted we get some kale to make for lunch.  While I was working on a project on my computer, she went into the kitchen and whipped up a little "kale snack" for herself.  I tried it - it's yummy!  Can't wait until she makes it for us for lunch!
Posted by Jill Kullen at 8:26 AM No comments:

We were all sitting outside today when Tyler announced she was going in to make lunch.  The first course was a pickled beet salad:

The beet salad was delicious!

After finished the beet salad Tyler headed back into the kitchen, first to do the dishes from the first course and then to prepare the entree course. 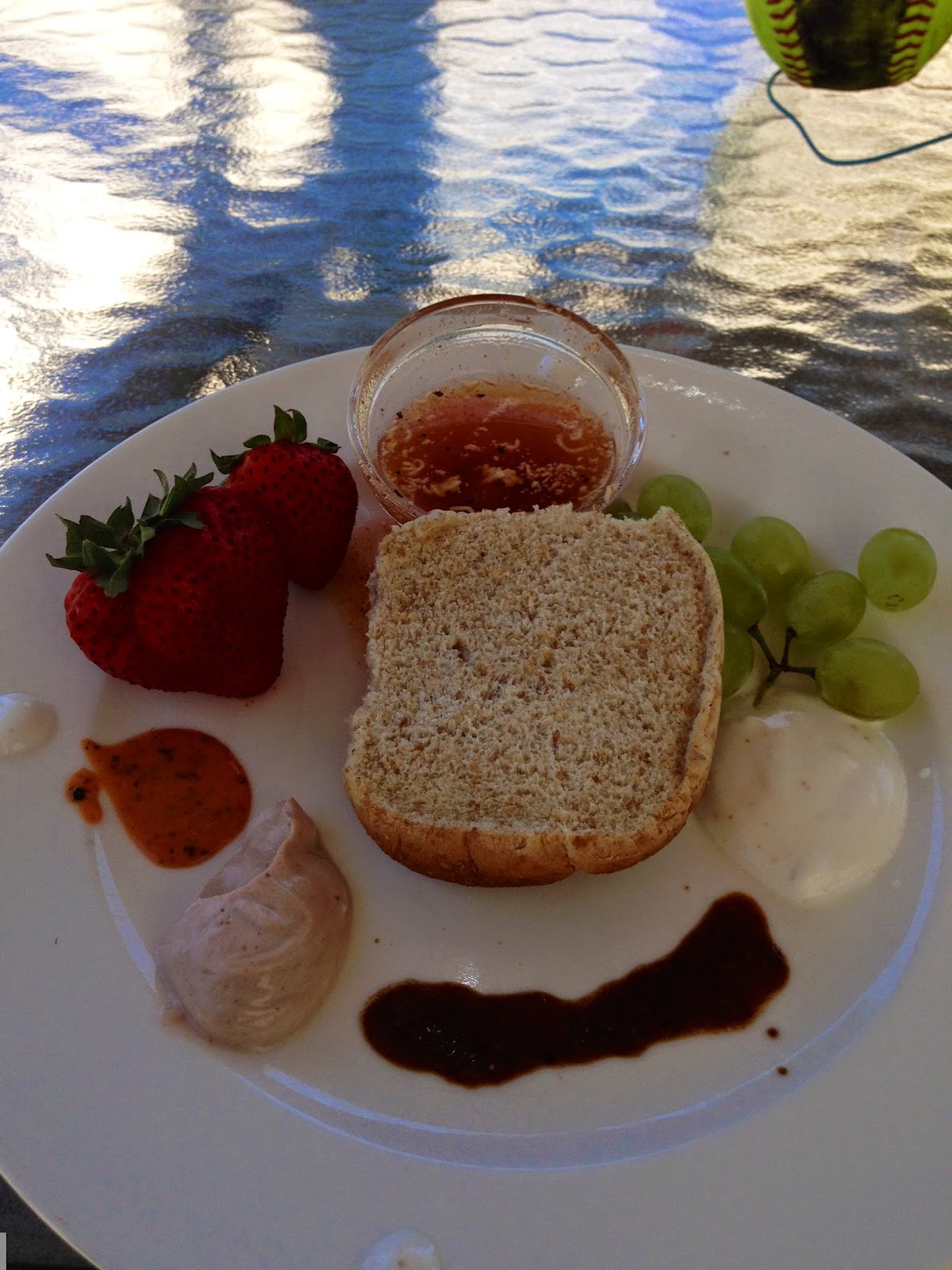 The entree course was a combination of fruits and half hamburger bun with 5 original, homemade dipping sauces.  All five sauces were very, very interesting.  Here are the descriptions starting with the sauce in the dish at the top of the plate and making the way clockwise around the plate:
1.  This sauce had a base of lemonade and lots of unknown spices.
2.  This base of this white, creamy sauce was Greek yogurt and sour cream and also had a combination of spices.
3.  The third sauce was aged balsamic and, you guessed it, unknown spices.
4.  The fourth sauce was made with Greek yogurt but this time, with an Asian spin, with the addition of sesame oil and soy sauce.
5.  And finally, the fifth sauce was made from melted cheddar cheese, cayenne pepper and some other tasty flavors.
What a fun, impromptu lunch! 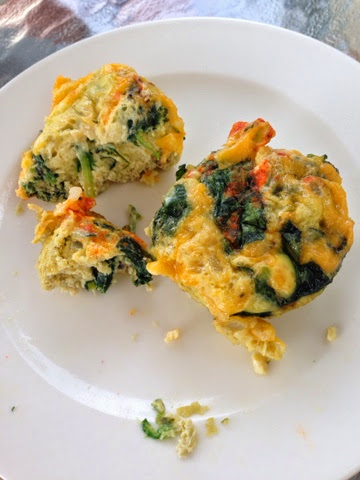 Ty woke up hungry today, eager to whip up something creative and delicious for breakfast. She decided eggs cooked in a muffin tin would be both fancy and delicious.
She started the dish by wilting some fresh spinach, then "sweat" an onion (seasoning both with salt and pepper to add an extra layer of flavor), and added them to some whisked eggs. After adding salt and pepper and a generous dose of Chilula, she ladeled the mixture into the prepared muffin tin and added a quarter slice of aged cheddar to each cup. She finished each one with a little fresh black pepper and swirl of Chilula. After 12 minutes at 350° and another minute under the broiler the muffins puffed up into tender, flavorful sweet little soufflés.
While we dined al fresco on our creative little eggy delights, Ty pointed out this was a perfect, healthy dish, "packed with protein from the eggs and cheese and vitamins from the veggies". Right you are, Chef Tyler!
Posted by Jill Kullen at 10:16 AM No comments:

Ty made a snack today for the Bears game which we think will be a perfect Thanksgiving appetizer:) Ingredients are red pear, green and red apples, raisins, large white raisins and peanut butter. Festive AND healthy! Sure to be "gobbled" up by a hungry crowd! 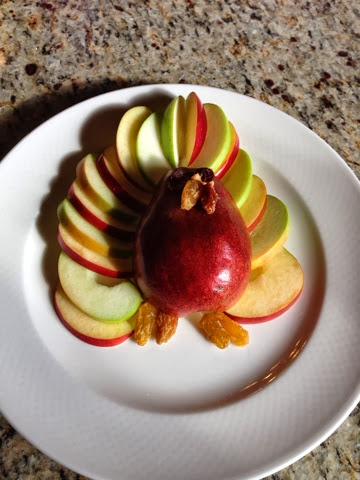 Posted by Jill Kullen at 1:23 PM No comments:

This morning Tyler created breakfast cupcakes for Phil's 40th birthday that were delicious.  She first caramelized onion and broccoli. Then she put a "crust" of the caramelized onion in the muffin cups, filled the cups with scrambled egg, placed a cooked broccoli floret in the center of each one ("so when you cut into the cupcake it was a broccoli filling"), and topped them with sliced cheddar cheese. They puffed up like little soufflés! Cute. We served them with festive birthday candles (which unfortunately melted into the hot cupcakes {hopefully candle wax isn't extremely toxic}). Very creative birthday breakfast!! 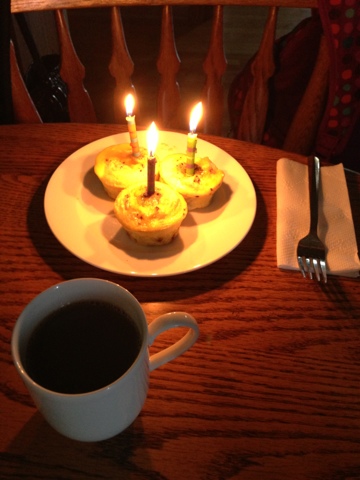 Posted by Jill Kullen at 7:32 AM No comments: 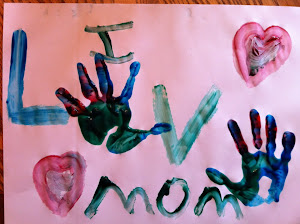